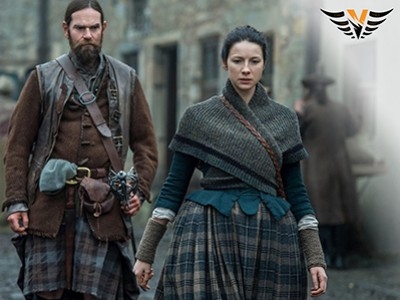 Season 5 of Outlander arrives in a few days on Netflix and on will not complain! Adapted from the literary saga Le Chardon et le Tartan written by Diana Gabaldon, could the series with Sam Heughan and Caitriona Balfe end soon? A producer gave the answer. So, should we worry?

Launched in August 2014 in the United States on Starz, Outlander continues to fascinate millions of viewers. With us, the series is available in US + 24 on Netflix and it is on February 17 that season 5, which promises to be very dangerous, will be launched. Season 6 has already been ordered and it looks like Claire and Jamie are not going to leave our screens for a long time.
Soon a spin-off?
The universe of the Outlander could also expand. Jeffrey Hirsch, President and CEO of Starz, explained that a possible spinoff series was under consideration. "There are a lot of opportunities with the Outlander universe for expanding stories, spinoffs or prequels. We are working with Sony. Hopefully we find something great to keep telling this story "he explained.