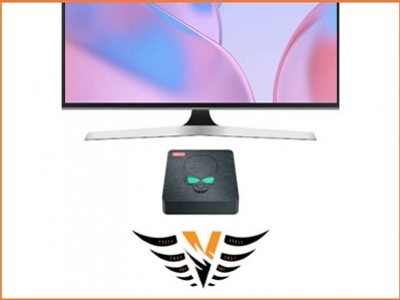 The Beelink GT-King II is the new high-end Android box from the Chinese brand specializing in tv-boxes and mini-PCs, which hadn't released devices of this kind for quite a long time. To equip its machine, Beelink has opted for a new Amlogic A311D2 SoC, still unpublished on TV boxes, which promises quite interesting performance gains.

It's a business, a family business

This new 4K TV box takes over from the first Beelink GT-King of the name, equipped with the Amlogic S922 SoC, which was released almost 3 years ago and which had been available in a pro version for audiophiles, but also in a GS-King X version, with 2 SATA 3 ports and a slot for 2 hard drives, designed for NAS type use.

On the design side, few things change on this Beelink GT-King II compared to its predecessor. Only the Beelink inscription in a red frame, whereas it was black before, brings a bit of novelty to the top of the TV box. For the rest, we find the famous skull typical of the GT/GS-King range with green eyes, all on a black background.

One point that bothers me, the remote control included with this GT-King II is similar to the one that was supplied with the 1st GT-King. It's a fairly old model and although it works fine, has a microphone for voice control and an airmouse function, it's still a remote that doesn't have the standing high end.

The wireless part is updated and recovers certain characteristics that we found on the improvement of the GT-King released a few months ago. Wi-Fi 5 gives way to Wi-Fi 6 2T2R which is more up-to-date and ideal for Cloud Gaming and Bluetooth 4.1 to Bluetooth 5.2. The RJ45 wired connection is always Gigabit, allowing speeds of up to 1000 Mb/s.

Android 11 takes care of animated GT-King II instead of Android 9, however, Beelink's more than aging interface is unfortunately back in the game. This does not seem to be the priority of Beelink, nor of most manufacturers for that matter, who make little effort on this side, most certainly due to the fact that many quality interfaces are accessible in 1 click from the Play Store or Aptoide TV.

Beelink announces that their Android TV box will allow viewing of Prime Video content up to 4K. Chances are it will have Google Widevine Level 1 DRMs like its predecessor. Regarding the Netflix 4K certification, no need to think about it, to my knowledge only certain Android TV boxes have it.


Features of the Beelink GT-King II


Where to buy and order the Beelink GT-King II?

The Beelink GT-King II is currently available for sale on the Beelink website for €199. It can also be found on Aliexpress.