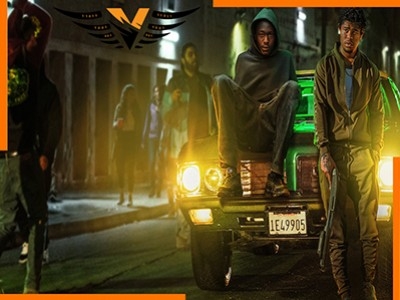 In gang-war-torn Oakland, California, Ashton Sanders (Moonlight) is a young kid just trying to get by while keeping his dreams of rapping afloat. He lives with his single mother (Kelly Jenrette, Uncorked), has a newly pregnant girlfriend (Shakira Ja’Nai Paye, Spider-Man: Into the Spider-Verse), and does his best to stay out of trouble. But when a desperately criminal act goes horribly awry, he finds himself in prison with the one man he never wanted to see: His father, Jeffrey Wright (Westworld), a hardened criminal who seems like the worst destiny for Sanders. Will their stay together show Sanders what it really means to be a man, giving him the opportunity to change his course? Or is fate too hard a knot to get yourself out of?

The trailer reminds me of many classic ’90s dramas like Juice, Boyz n the Hood, or Menace II Society. It offers a typically sensitive lead performance from Sanders, astonishing in Moonlight, and an against type performance of hard, immoral bravado from Wright — though the promise of real humanity at his soul is there, too. While many of the beats may seem familiar to viewers familiar with this type of film (as many of the YouTube comments cannily point out), it will likely still offer authenticity, emotional fireworks, and hopefully hope.

All Day and a Night comes on May 1.